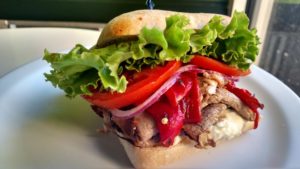 When “The Veggie Man” calls we listen and this week he called to say he had BEAUTIFUL red bell peppers that he just knew we could do something great with…so we did!  This time of year most summer crops are winding down but those peppers hang on into the fall and we are glad that they do!  When presented with a whole case of perfect red bell pepper specimens all Chef Mindy can think about it setting them on fire…really…that’s no joke.  We’ll give you the low down on how to roast your own peppers later in the week but for now behold THE ROASTER!

We start with a ciabatta bun and add a base of our very own blue cheese & scallion cream cheese spread and top it with our house roasted eye of round beef and those fire roasted red bell peppers & throw that bad boy on the grill because you know what Mindy says; “Any time you can melt cheese it’s a good thing!”  We finish it off with green leaf lettuce, red onion and tomatoes from the Veggie Man.  We’re not saying it’s the best sandwich in the world but we could